The other day, I realized that I have too many T-shirts. My husband has been telling me this for years, but I now have more shirts than fit on their designated shelf. So, regretfully, I am going to need to pare down my T-shirt collection a bit. Many of my shirts come from running various races. I do not want to get rid of any of them permanently…I ran too many miles to just put them on the rag pile! Besides that, there are a lot of memories associated with each of those shirts. 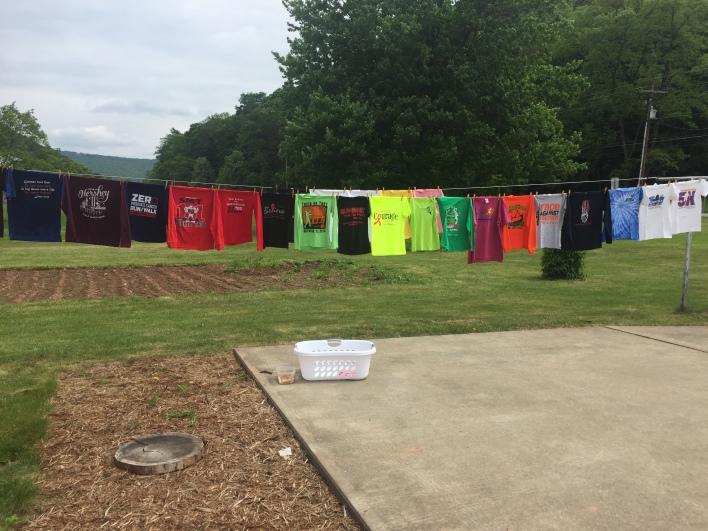 If anyone were to tell the 16-year-old me that I would be running more than three miles for fun, I would have laughed. I had friends who ran track, and I could never understand the fascination. I even dreaded running “the mile” every year in gym class! When I began teaching, there were two ladies who befriended me who ran a few 5Ks and they were instrumental in convincing me this was a good idea. When I began running, I figured it was good exercise, did not cost anything (unless I wanted it to), and as I began to run farther and farther, I was amazed at what my body could do!

This shirt is from my very first 5K race. I ran with a teacher-friend from school, and we dressed up as Thing 1 and Thing 2 from the Dr. Seuss book The Cat in the Hat. It was a struggle until the end, but we finished! I do not remember my time, but it really does not matter because just running the whole thing (which we did!) was quite the accomplishment!

We have run a couple of night races along the way. It is something different, but not a favorite. This particular race was a “glow run.” Many runners were wearing glow bracelets and necklaces, and as they ran, they bounced up and down. That was a bit of a nauseating sight! I was not feeling the best that day, and the course was a bit challenging. But again, we finished! Interestingly enough, a good friend and I run the most difficult part of this course rather frequently now.

In the spring of 2014, my good friend convinced me to run a 10K with her. That is 6.2 miles. I had barely run more than 3 miles at a time, but she and I ran it. It was a very flat course by a river. We did have to walk a little bit throughout this race, but I felt very accomplished at the end! And my good friend succeeded in getting a goose to hiss at her along the way, which has since become a tradition, as we have run this race every year since.

After my first 10K, this crazy thought went through my mind. If I can run 6.2 miles…why can’t I run 13.1? Oh yes, this was my first consideration of running a half marathon. When I realized that I drove exactly 13.1 miles to work each day, that distance seemed a bit daunting! But, I made my decision and signed up for the Presque Isle Half Marathon in Erie, PA. My brother was living in Erie for the summer and working on Presque Isle, so it was a perfect arrangement. Even though it was the middle of July, having Lake Erie beside me and plenty of shade trees made the experience more enjoyable. My brother was a huge support throughout the race. He would drive a few miles ahead and then cheer me on as I went by. Then he would drive another couple miles and do the same. Until the last half mile, which was the most special part of the race. My brother parked his car and ran the end of the race with me. I was in pain at the end, but it was such an amazing experience!

In 2015, my good friend and I set a goal to run fifteen races in 2015. Throughout that year, our 5K times kept improving and we became stronger runners. The first race we ran that year was called the “Twilight Wish 5K.” We were rather unprepared for this race, and it did not help that the course was very difficult! We walked part of the route. But, in the end, my friend placed in the top three in her age bracket and received a gift card to Sheetz! So it was worth it! 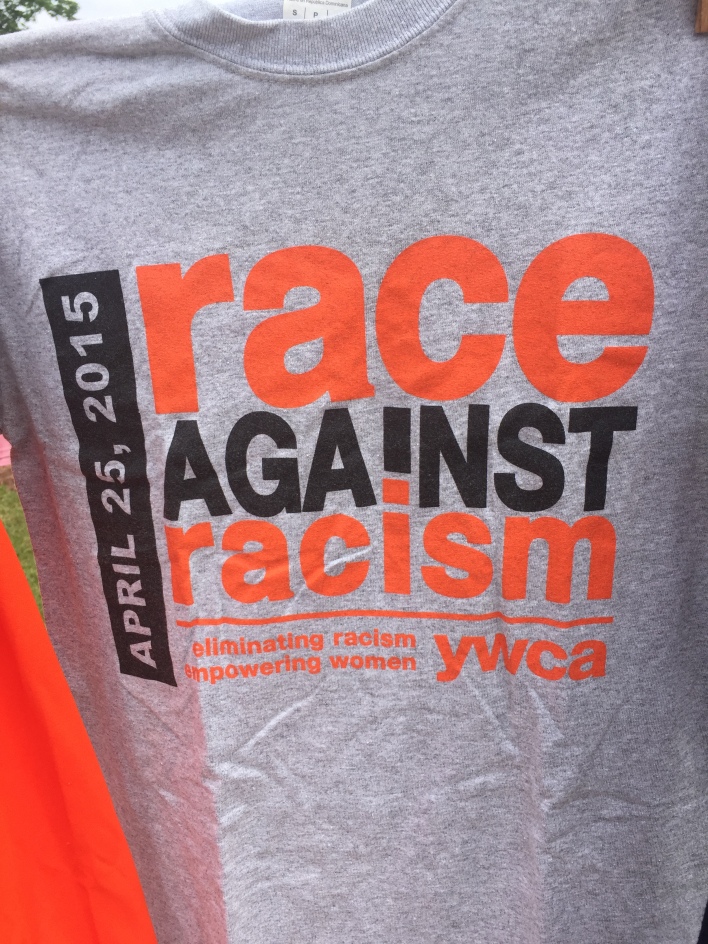 One of the funniest stories we have comes from a race next to a minor league baseball stadium located on an island in the middle of a river. It was a smaller race, and it was not chip timed. There was a line of porta-potties, but only a few were open. Naturally, we had to make a pit stop before we began the race. We waited in line, and we knew it was getting close to time when the race director began calling people to the starting line. We both got into a portable bathroom, and as we were trying to hurry, the race started! We rushed out of the porta-johns and began running toward the starting line! We were not that late, but when we got home and told our families that the race started and we were stuck on the toilets, they got a chuckle out of the situation! And, might I had, this same scenario has happened to me twice since then. And as long as we continue running, I am certain it will happen again.

Another race, which I do not have a T-shirt for, was called “Journey for Josie,” a little girl with Lyme’s disease. It was August, and none of the advertisements we saw gave us any clue that it was on a cross country course. We found this out rather quickly. It was so hot, and the ground seemed to just drain the energy out of our entire bodies! But we triumphed in the end, as both my good friend and I placed second in our age brackets and I had my first running medal to take home! 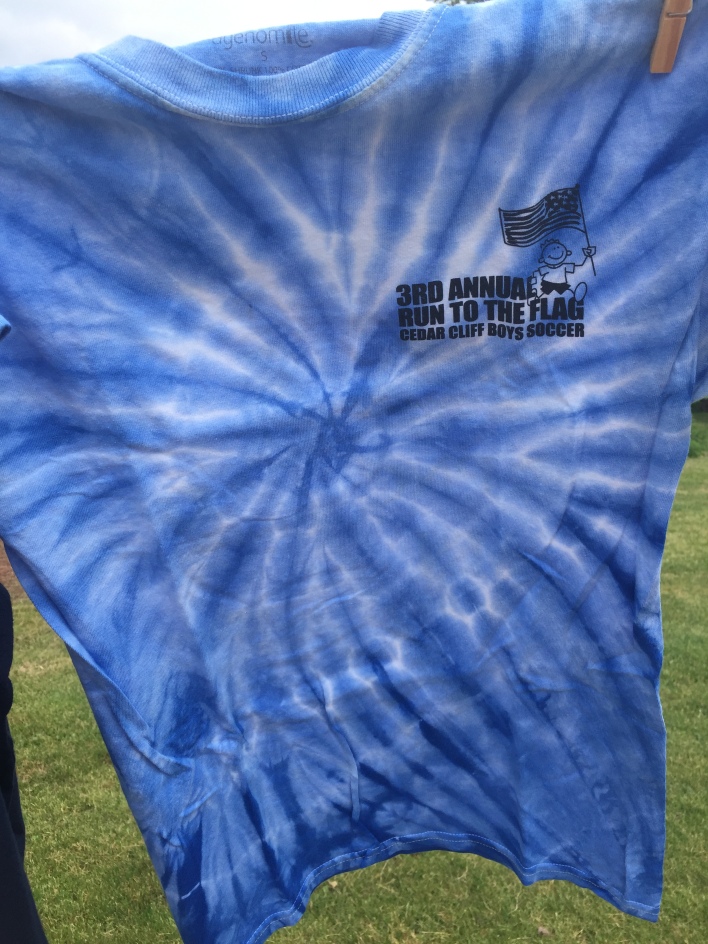 On Labor Day 2015, I ran my last race as an unmarried woman!

Our fastest 5K time ever came in a Jingle Bell run in December. It was a rather warm December day, and the entire race jingled, since everyone was wearing bells. It was a very festive sound!

2016 was big year for distance running. I completed two half marathons and a full marathon. My good friend and I ran the Presque Isle Half Marathon (her first half ever!), I ran the Hershey Half Marathon alone, and then in November, my husband’s best friend talked me into running the Philadelphia Marathon with him. (Again, tell the 16-year-old me I’d be doing that!) I did not train hard enough for the last two races, I can admit that. But I crossed the finish line.

I have so many memories from the Philly Marathon. The first 8 miles or so went through the city. There was so much to look at, and those miles flew by! But then we started heading out of the city, past the Philadelphia Zoo, into a park…and it started getting harder. It also started getting colder and windier. By the time I got to mile 14, which was around the Philadelphia Art Museum, my legs were cramping up, my back was sore, my feet hurt…my lack of training was catching up with me. I caught up to the man I was running with, and he was struggling as well. So…we walked. The longest 12 miles of my life. The wind had picked up, and a few times it nearly knocked me over! We turned around in Manayunk, and on our way back, maybe mile 18 or 20, I was so temped to just quit. I wanted it to be over. There was a Dunkin’ Donuts on a side street, and I was seriously entertaining the thought of just stopping there, drinking some coffee, and calling my husband to come pick me up. Here is where the mental toughness aspect of running really comes into play! With the help of my running partner, I fought through it. And we finished! We may have walked across the finish line, but we did it! A medal never felt so good hanging around my neck! It also never felt so good to just sit down!!!

So, with all those memories wrapped up in pieces of fabric, what am I going to do? I have considered making a T-shirt blanket, but that is definitely not an original idea. Pillows are a possibility. But who really needs that many pillows?? I have no doubt something will come to mind.

In the meantime, I would love to hear your ideas! Have you created something using old T-shirts? What ideas do you have? I would also love to hear some fun race memories!

The MyFitnessPal App – Does It Work?

DIY Gifts to Sew for a Baby Boy

View all posts by herruralhighness →